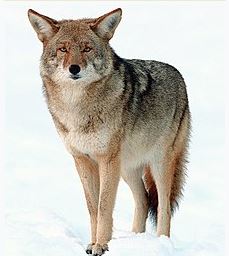 Have you ever heard noises that sounded like one thing but was something else entirely?

Well that happened to us at Colt Creek State Park. We thought our neighbors across the way were having a fun party! What we had forgotten was that Florida parks have coyotes.

We took our Lily out for her final time about 9:45 p.m. the sky was cloudy and there was lightening. It was very eerie out! That was when we  heard what sounded like high pitched laughter, howling (anyway I think that was howling I heard), and barking! We listened and thought okay there is a party going on and we were not invited. However when we looked in the direction the sound was coming from no one was out and there .were no lights on or even a campfire burning.  So our first thought was what is this and the second was oh my I believe we are hearing coyotes. We listened for a few minutes and then we decided we needed to be in the RV!

The next day on our bike ride we ask a ranger we saw about the sounds we heard. He confirmed that it was coyotes and told us you can hear them most nights. He said they were probably hunting.

Although it was very eerie we are glad we were able to hear them. It’s an experience that neither Norm nor I will ever forget!